During 2004 I was working in a project looking at how context awareness can play a role within forming and supporting social ad-hoc communities. We also looked at various types of services that could drive the formation of ad-hoc communities, at the relation between service offered, required trust levels and community persistence.

The most obvious use of context in building an ad-hoc community is location-based (can also be a virtual space, not only a physical one). For example, communities built based on people that are now in the Boston Symphony Hall and that like Beethoven, or people that are now in the supermarket and prefer organic food, etc.. Also, communities can be built from people that share the same interest for something, where interest could be derived from certain biometric sensors or other types of actions, like spending more time in front of a painting  in a museum, or based on a current user activity, like bird watching.

Another use of context considered was  for increasing trust in ad-hoc communities, given that they might be formed in the absence of established reputation systems. In this, certain context information could be used for determining if an invitation to join a community should be accepted, e.g., I am more likely to accept invitation of joining an ad-hoc community from somebody I know (or FoF) or somebody I share certain characteristics with than somebody unknown. 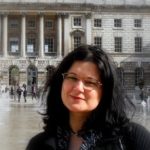